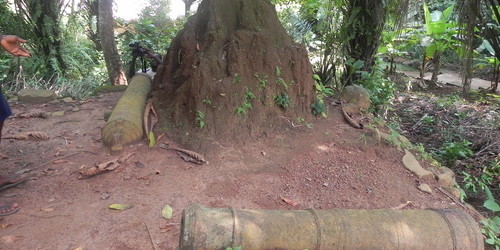 Sierra Leone was one of the countries heavily involved in the slave trade between the 16th and 19th century. Many strongholds have been created by the European powers to gather large numbers of slaves and keep them to be sold and transported to the Americas. Two major centers to assemble slaves were Bunce Island and Banana Island. Banana Island was the smaller one where it is said that up to two thousand slaves could be on the island simultaneously.

The ruins of the Slave Hole, the Old Fort, the old St. Luke’s Church, and a small museum with tools and chains from the slave trade are reminders of the vivid activities of the prosperous slave trade. A tour to these historical sites is combined with a leisure stroll through the village of Dublin with a glimpse of the past and the present of Banana Island.